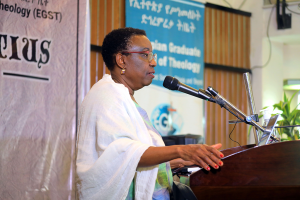 The 2022 Annual Frumentius Lectures organized by the Ethiopian Graduate School of Theology (EGST) concluded on March 18, 2022. The theme focused on Peacebuilding and Conflict Resolution delivered by the key speaker of the year, Professor Ann Kubai, an associate Professor of World Christianity and Interreligious Studies at the School for Historical and Contemporary Studies in Souderton University, Sweden.

Planned in two stages, the first series took place from March 15-17., 2022 at EGST while the final one was delivered at the Elilly International Hotel on March 18,2022. This year’s lectures are special as it coincided with the 25th Silver Jubilee anniversary of EGST and was relevant and timely for the church and society in Ethiopia. 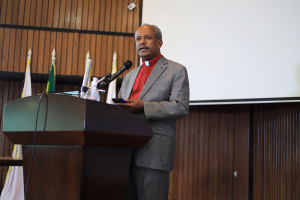 Opening the event at EGST, Rev. Dr. Wakseyoum Idosa, EGST Board Chairperson and former president of the Ethiopian Evangelical Church Mekane Yesus noted the successful journey of EGST throughout the last 25 years and expressed his appreciation for those who made significant contributions to the expansion and growth of EGST over the years. He also encouraged the attendees to reflect on Jesus’ words, “Peace I leave with you; my peace I give you. I do not give to you as the world gives. Do not let your hearts be troubled and do not be afraid.” (John 14:27). He further reminded the audience to think of those who are troubled and displaced in our own country, in Africa, Ukraine, and the whole world because of lack of peace. 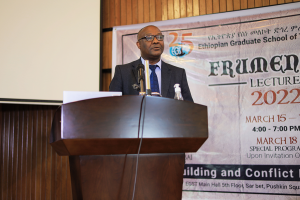 In his welcoming address, EGST Director, Rev. Dr. Misgana Mathewos shared that the annual public lectures of Frumentius are eagerly anticipated each year and reminded the audience about Saint Frumentius, the first Bishop of Ethiopia in the fourth century, consecrated by Saint Atnacious in Alexandria. The Director said, “We, here at EGST believe that this Christian missionary nationally known as Abune Selama Kesate Birhan, Father of Peace, and Illuminator of light represents and symbolizes an early Christian heritage that is common to all Christians who belong to Orthodox, Catholic and Protestant traditions in Ethiopia. Besides addressing selective biblical and theological themes annually, the Frumentius lectures are also intended to serve ecumenical purpose as we see ourselves here today coming from different ecclesial and societal backgrounds.”

The Director acknowledged that all lectures conducted in previous years have added significant value to EGST’s academic and public life and contributed to the aspiration of the organization to become an institute of academic and research excellence for stronger churches and transformed society.

The Director also said that this year’s lectures are rather unique for two reasons. First, it happens on the silver Jubilee Year of EGST as we celebrate the 25th year through various events, and second the topic selected for this year is very relevant and at home to the current situation of Ethiopia as the country is passing through many conflicts that affected peace and security of its citizens across the regions of the nation.

In concluding his address, the Director said: “Besides contributing towards EGST ambition to become an institution of research excellence, it’s our belief that the lectures of this week presented by Prof. Anne Kubai on the theme of peace-building and conflict resolution will contribute towards awakening the churches, leading theological institutions, and church affiliated organizations to play their roles in establishing the much-needed peace in this country.” In relation to the future, the director announced the launch of the new Masters Programme in Peace and Sustainable Development at EGST beginning in August 2022 for which applications for admissions is open until May 2022.

In her first lecture, Prof. Kubai talked about principles and theories of peace-building, where she acknowledged that as an African theologian trained in the West, she has thrived much to stick to Afro-centric perspectives because of her engagement in creation and decolonization of knowledge. She emphatically noted that we have never needed peace more than we do now, and called on all actors to do all they can to restore the peace. She pointed out that peace-building must have a multi-faceted approach as conflicts do not just arise in the morning. The importance of resilience has been stressed to help society not to relapse into conflict or violence, and build the social fabrics. During her first lecture, Prof. Kubai defined peace, and talked about negative and positive peace which she found relevant to the context of Africa. She said that negative peace implies the absence of war, but positive peace implies equity. 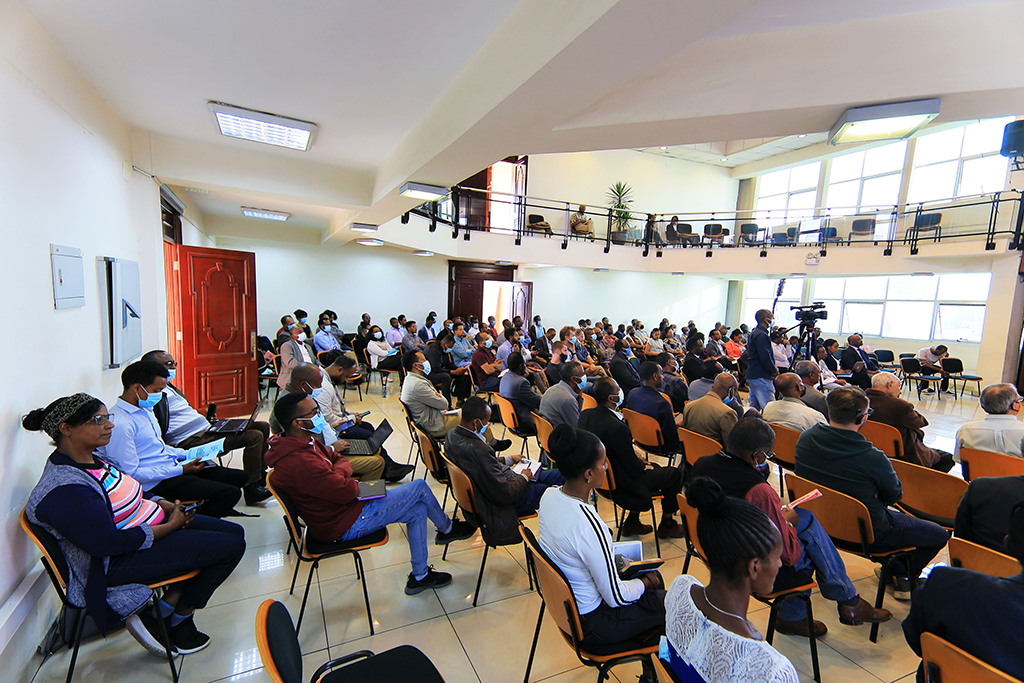 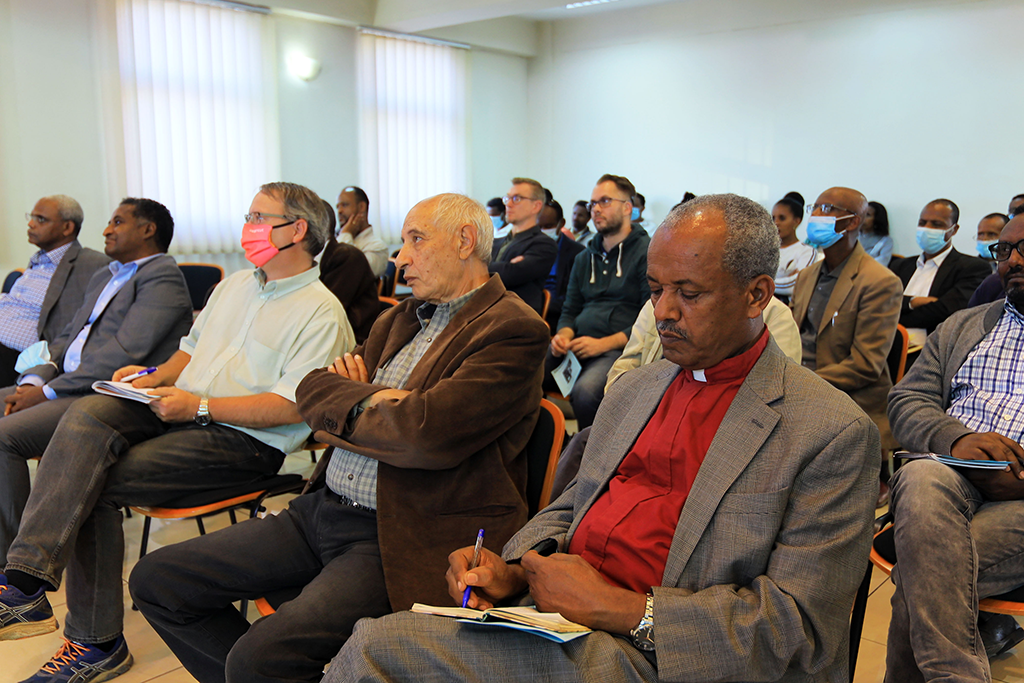 In the second lecture, Prof. Kubai spoke on the causes of conflict in Africa and encouraged the audience to have a different lens to look at it. In this regard, she talked about the concept of civil space, which is not limited geographically, but has been the cause of conflict in many countries, especially in the horn of Africa. “The civil space is where societies, communities, men, women, youth, adults, may be children, take a stand and interrogate each other, interrogate the state, discuss and negotiate with the state and with each other about duties, and obligations,” she emphasized. She also said, this abstract civil space has been shrinking because of the type of governance, discrimination, oppression, and inequality, matters of rights, duties, and privileges.

Prof. Kubai’s third lecture was on “The role of theological institutions and churches in peace-building and conflict resolution” where she stressed on the role of academics to produce knowledge that can help us resolve conflict or prevent them or build peace and also make churches stronger and transformed by using faith as an identity maker, a tool for othering and a unifying factor. 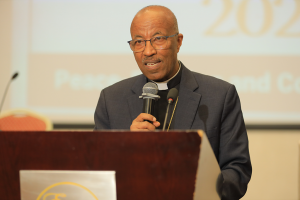 Opening the fourth day lecture, Rev. Yonas Yigezu President of EECMY and Chair of EGST Council of Owners, stressed that peace is a much-needed commodity in the world, and in Ethiopia today and that we have a calling to love God, and serve our neighbors.

EGST Director, Rev. Dr. Misgana Mathewos warmly welcomed the audience and invited all interested stakeholders to embark on their graduate level of studies, cooperate with the areas of social engagements, and support EGST in any way their like. He stated that EGST belongs to the people by the virtue of being owned by the three ecclesial bodies. 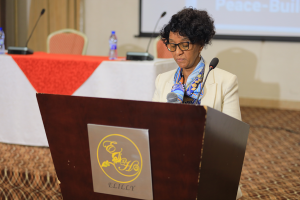 Honorable Hirut Delebo, Head for Ministerial Office of the Federal Ministry of and special delegate of the minister expressed her appreciation and gratitude to EGST and the relevant topic under discussion, she noted that safeguarding peace and protecting and maintaining peace is an expected duty and responsibility from every citizen. She called on all educational institutions to follow the example of EGST in doing research, public lectures, and community engagements for a bright future of the country.

On the final day of the lecture, Prof. Kubai summarized her lectures on peacebuilding and conflict resolution with a fresh look at it. 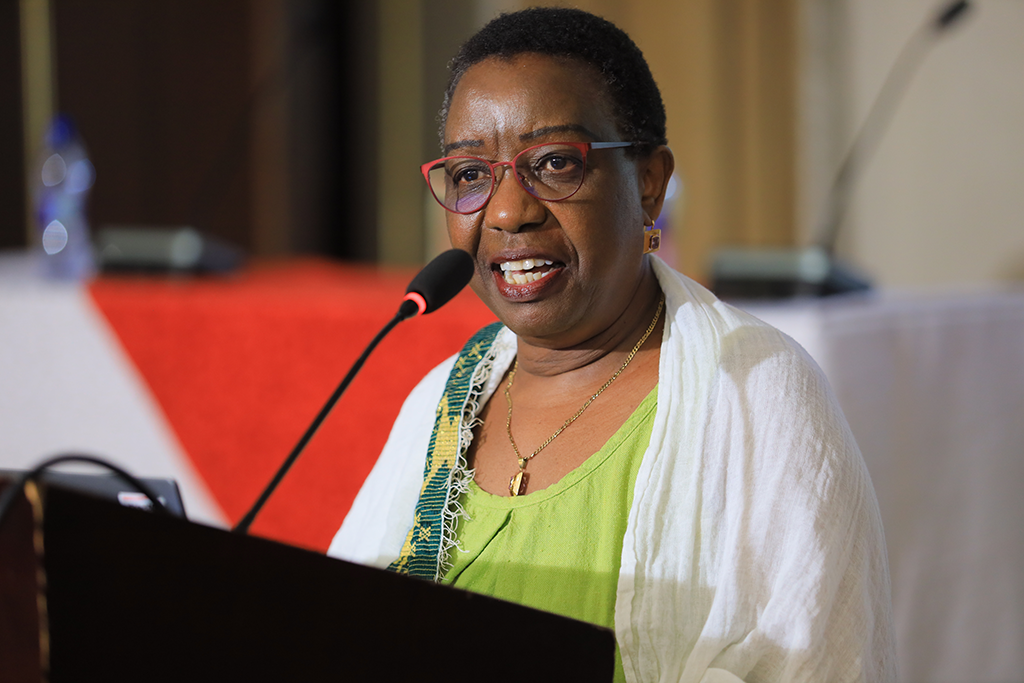 On the fourth day of the lecture series another key speaker, Dr. Yonas Adaye,, Associate Professor and Director of the Institute for Peace and Security Studies of the Addis Ababa University, and current Commissioner of the National Dialogue Committee spoke on “Peacebuilding in the Post-Conflict Context: The Case of Contemporary Ethiopia.” 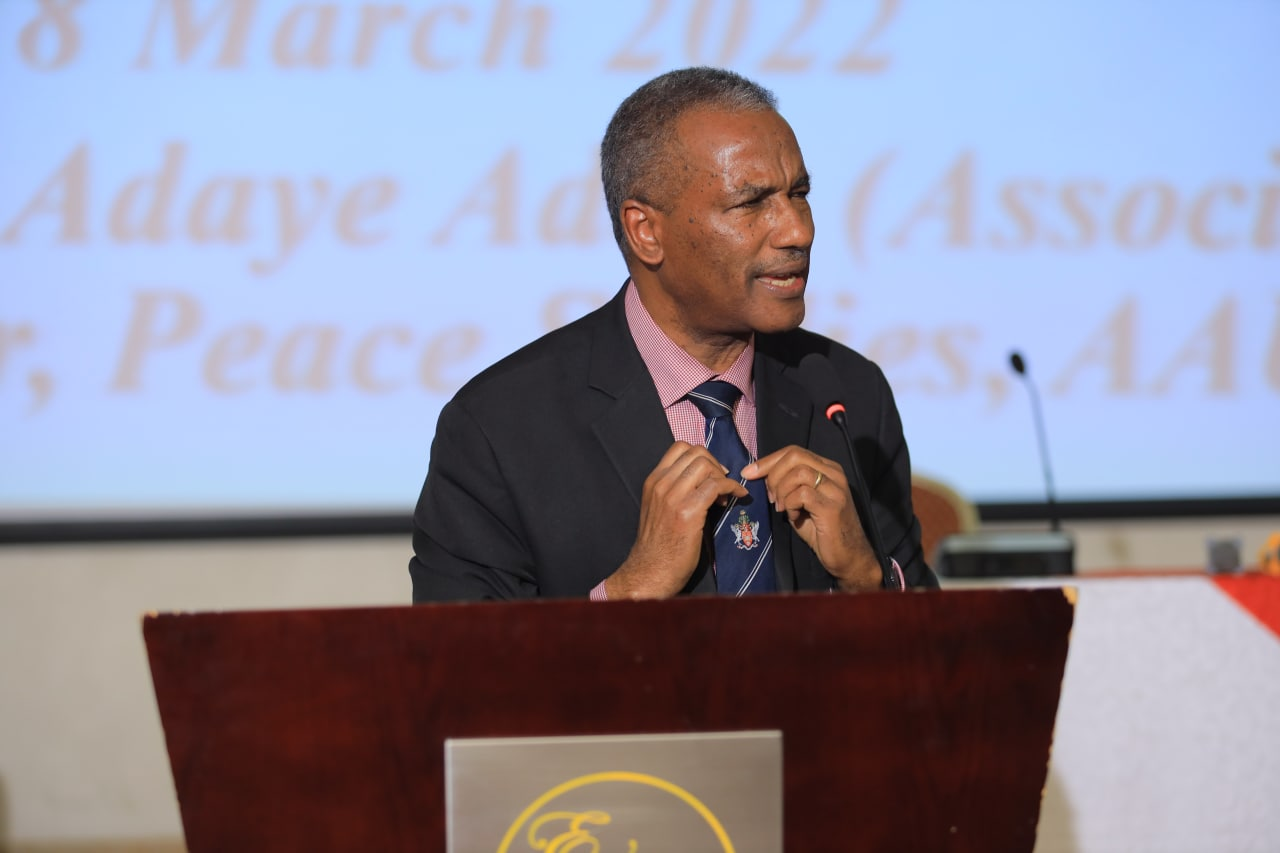 Dr. Yonas Adaye persuasively shared peacebuilding in the post-conflict context, and shared the case of contemporary Ethiopia. He emphasized and called on the audience to live for a cause as Christians, , to be  the change agents in the planet earth and to pray differently in this time, not only to our country but to the entire world, which is on the verge of collapse . 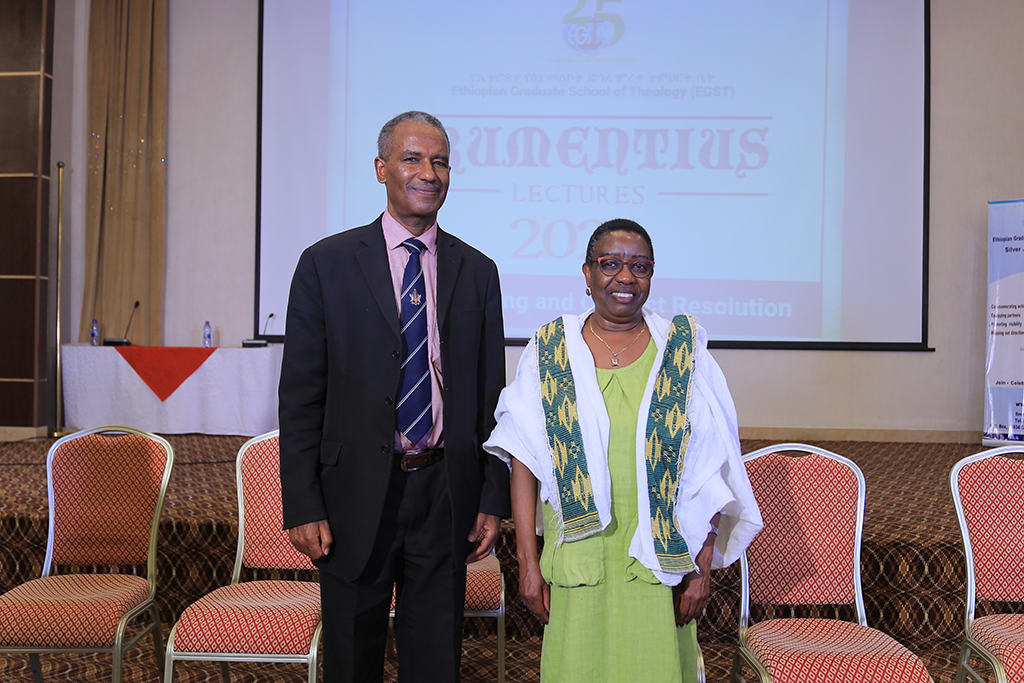 The Jubilee Frumentius Lectures 2022 were attended by a large audience including EGST Council and Board members, invited guests, partners, NGOs, and governmental organizations as well as EGST current students, alumni, faculty, and staff.

A great deal of her work has focused on peace-building and reconciliation after mass violence or grave violations of human rights. She has a keen interest in the way spiritualties or religions, including indigenous and others, socio-political developments, post-conflict social reconstruction and sustainability discourse in different parts of the world.

Kubai’s work on forgiveness and reconciliation in Rwanda has contributed to the debates on peace-building and transitional justice after mass violence or grace violations of human rights. Kubai has worked in Kenya and Rwanda for many years. She has served as a visiting professor in several institutions. For a number of years, she has worked as a research director for Hope and Life Institute, an international ecumenical center for peace research and action in Uppsala, Sweden. In this position, she was responsible for planning and supervising the implementation of the institute’s, research agenda in Africa, Sweden, and other places where the institution had interests. At the same time, Kubai carried out research on forced migration and sexual violence in some of Africa’s most volatile regions, which refers to the horn of Africa. Kubai also worked as a senior social scientist at the division of global health, department of Public Health Sciences at Karolinisca Institute in Stockholm until recently she was a researcher at a center for multi-disciplinary research at the Department of Theology, Uppsala university, Sweden.

She has served as a resource person in a number of international training programmes, for faith community leaders, and psycho-social support for peace-building and health-care providers for children in conflict situations to a different institutions and organizations.

Kubai has published numerous academic journal articles, co-edited books, contributed to ontologies, folklore sciences articles, and research blocks. Kubai has also appeared in the following documentaries, such as Ordinary Savage, The Origins of Violence in Hurt Feelings which appeared in 2018, in Spanish folklore in Rwanda, as well as Swedish Radio show. She also made two documentaries, one is Female Warriors to Counter Women’s Insecurity, Livestock and Resilience, which appeared in 2017, and the other one is Informed Readers, Peace, Social Change appeared in 2017. Outside the academia Kubai is an international expert consultant for community based, psychosocial support after emergencies and peace-building. Previously, she served as a member of the international psychosocial support for more than a decade. She has a long experience of working with a number of international NGOs and faith-based organizations in humanitarian development, and peace-building sectors. 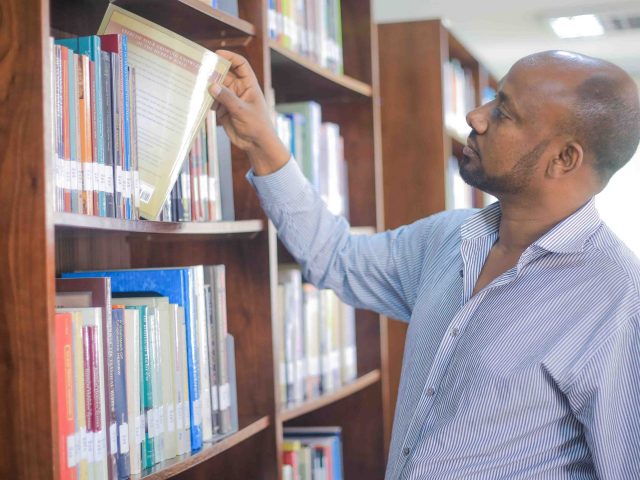 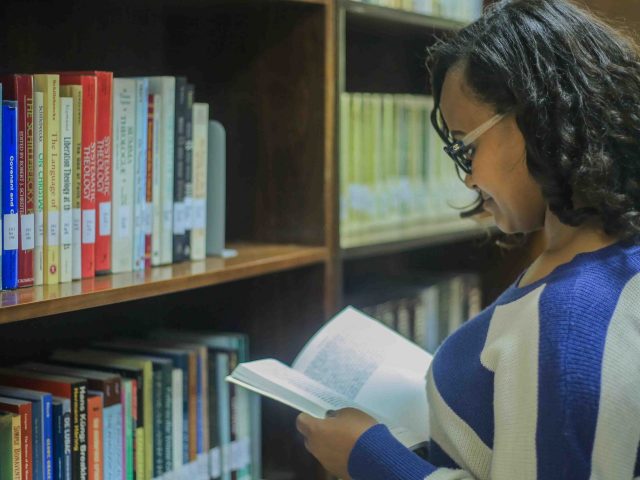 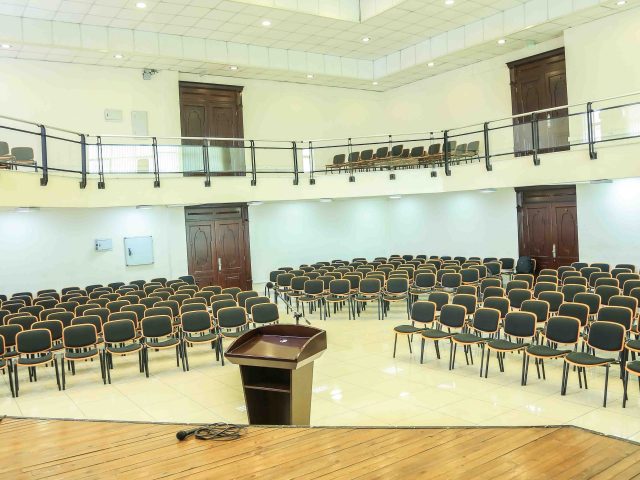 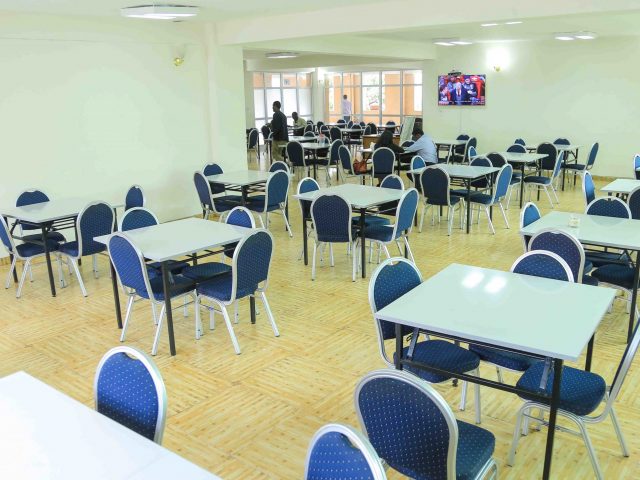